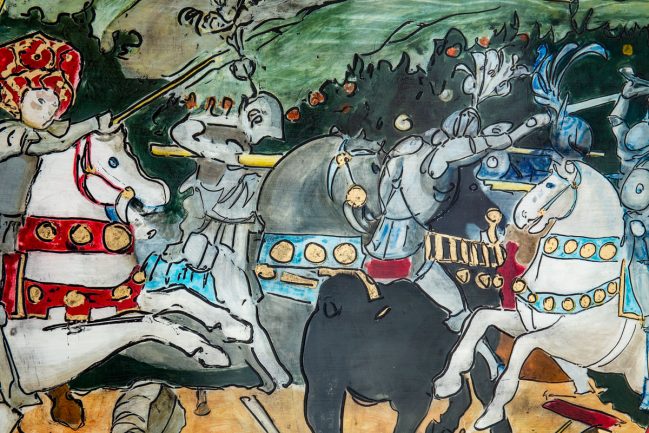 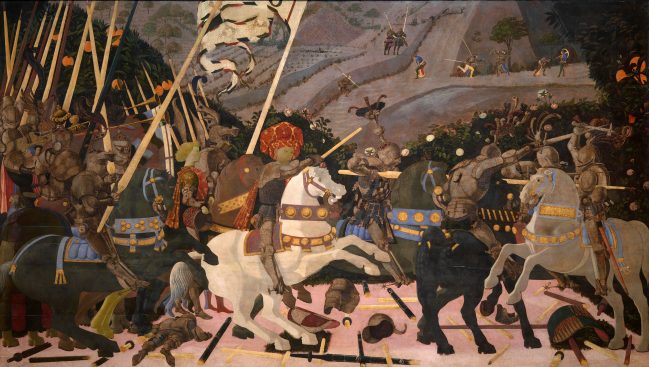 Title of the painting: Battaglia di San Romano – National Gallery
San Romano Battle – National Gallery – Paolo Uccello
Painting on wood with finishing touches
Dimensions: 185 x 125 cm |  72,83 x 49,2
The Battle of San Romano is a set of three paintings by the Florentine painter Paolo Uccello depicting events that took place at the Battle of San Romano between Florentine and Sienese forces in 1432. They are significant as revealing the development of linear perspective in early Italian Renaissance painting, and are unusual as a major secular commission. The paintings are in egg tempera on wooden panels, each over 3 metres long. According to the National Gallery, the panels were commissioned by a member of the Bartolini Salimbeni family in Florence sometime between 1435 and 1460. The paintings were much admired in the 15th century; Lorenzo de’ Medici so coveted them that he purchased one and had the remaining two forcibly removed to the Palazzo Medici. They are now divided between three collections, the National Gallery, London, the Galleria degli Uffizi, Florence, and the Musée du Louvre, Paris.

As described in the historical review above, this tryptic is based in a major event in the history of Firenze, done by the Master Paolo Uccello in traditional renaissance technique. Like the original ones, on this contemporary interpretation made by Iguarnieri, was used the egg tempera technique on wood fresco surface. Iguarnieri has followed same principals and techniques rules as the great Renaissance Master of the past Paolo Uccello.