Share  “Beauty” with “Art Lovers” from all around the world:

featuring a multitude of genres with a focus on Florentine’s way of appreciative value.

Whether you are interested in purchasing a single painting or implementing and expanding a comprehensive art program, our private art gallery studio iguarnieri, is able to assist you on a multitude of levels.

In this website we document and share with the public our experiences, artworks, activities and painting tours around the world.

Art Gallery Studio Iguarnieri  is the most well known studio of Local Artists in Florence, where to buy original Fine Art.

The studio specializes in Contemporary Fresco Paintings and Sculptures for the Art Lovers and Collectors from all around the world.  In a national and international role by preserving, collecting, exhibiting, and understanding the contemporaneity of nowadays at the highest possible standards.

Simply choose your art and we think about the rest

Under the Michelangelo’s Piazzale, in front of the River, by the Poggi’s square ramp. Ten minutes walk from Ponte Vecchio, just outside San Niccolò doors, you find THE ART GALLERY STUDIO IGUARNIERI. In a townhouse with terrace by the Arno River, the florentine Masters Roberto and Rodolfo paint in fresco technique Florence, the Tuscany Landscape, tributes to Michelangelo, Botticelli, Da Vinci, Ghirlandaio, Brunelleschi, Masaccio, from the Spring till Picasso and Modigliani nudes, also by commission, you may satisfy every single wish for your home. The world wide shipping is guarantee.

March 2021 During this winter we have been working and delivering the best art in Florence and abroad, as ...

END_OF_DOCUMENT_TOKEN_TO_BE_REPLACED 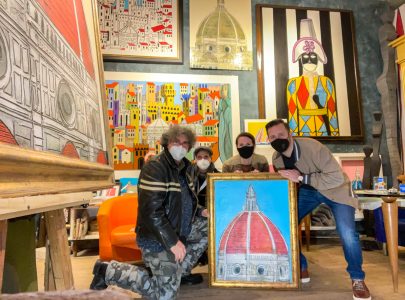 From Firenze with love

Hello friends, clients and public from all over the world! Today we want to share the story of a ...

END_OF_DOCUMENT_TOKEN_TO_BE_REPLACED 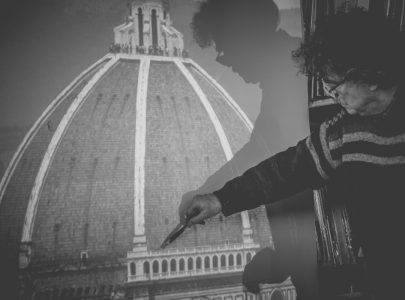 END_OF_DOCUMENT_TOKEN_TO_BE_REPLACED

December 2020 Hello everyone, we hope all of you are safe and doing the best as possible during this ...

END_OF_DOCUMENT_TOKEN_TO_BE_REPLACED

Critics “Hands, in the magma of the visible”

The “manual” imprint which characterizes the fresco paintings of Iguarnieri apparently seems to distinguish itself through the various distances between figurations of reality and their representations. The given natural forms (landscape, human and vegetable forms) seem metamorphosed and exaggerated, in different ways, from the application of a very original technique of preparation and execution of the work: a type of fresco in progress applied to many different surfaces and capable of a myriad of following interventions until the final version is fixed.

Within the skill of the manual gesture the great tradition of the florentine manual and artistic workshops where the highly imaginative concreteness of the craft is united with the capability of freely modulating the material by projecting one’s own inner perceptions onto it has accumulated. The gradual, clever manipulation the substance has to undergo (whitewash, pigments and then varnish) at times turns the initial given natural forms into a sort of “sinopia”: the initial mimesis is still visible in the background but has taken on the plastic nearly sculptural vitality of the bas-relief and communicates an expressiveness that is “magma-like” wind, current, furrowed: the dissolving element of the form that tends to disintegrate into cracks and incisions and is at the same time the unifying element of the work. It therefore occurs that the delicacy of colours and the sharp contours of the genuine form are “hardened” by the work completed by the artists on the surface; however, the modified material acquires an equally natural beauty by exuding a very strong “tactile” appeal that induces one to touch the relief of the finished works.In the Gallery Studio Iguarnieri the stratified modulation which is necessary for the realization lends the work a vitality that leaves the banal evidence of the initial visual stimulus behind and the same effect that sometimes nearly is hyperrealistic exudes a material vigour nearer to a hand-made object than to the painted work. In fact it is possible to define this bizarre creative process as an innovative blending of the painted signs in their colourful elaboration with their supporting surface. This process isn’t far from the technique used for the realization the bas-relief and the incisions where a greater “immersion” into the substance is necessary. The preciousness and uniqueness of the paintings show how the profound knowledge of the craft transfers itself spontaneously into the material that is being dealt with in that it returns an initial energy to the given genuine object. In the contemporary paintings of the Iguarnieri brothers therefore the process that joins the manual and physical gesture with the power of the inner forces that nourish the artistic action seems to condense itself with surprising clearness. Through the filter of personal sensitivity these forces come to influence the work by having an effect, smoothing and drawing together the forms of the visible. In some cases it is possible to describe this process as a sort of intense “regression” in which the figurative fact is reduced to a minimum, sometimes made unclear in its fundamental lines. The “physical quality” necessary in order to bring the work to life tends to re-absorb the contours of forms, the objectivity of the given visual facts in the magma-like vagueness from which, however, it should emerge, nearly realizing a sort of inversion of the creative process. In these works the representations appear suspended at the point of clear distinction between the given visual facts and their diminution held in a synthesis in which the sedimentation of the material tends to disguise, hide, re-immerse the form into the primordial core from which it emerged. The gesture of the hands completely recovers the legacy of a tradition based on a solid and irreplaceable experience of live contact with the material which is deeply known and discerningly elaborated in its innumerable expressive differences. However, the sensitivity of the Art Gallery Studio Iguarnieri -craftsmen, creating from their inner experimental restlessness, men that are bound to their own generation renew the experience of the past and restore it with the vigour of a technique that has become genuine device by means of which a different and more fruitful confrontation with reality occurs.
Read more